Toyota is Working to Use Hydrogen in Many Different Ways

The new Mirai hydrogen-powered car from Toyota isn’t the only way that the automaker is making use of hydrogen to benefit the earth and make a shift from fossil fuels. Apparantely the Toyota also plans on using hydrogen in its Miyata plant to power forklifts. This is a technique that could shift to additional tasks and applications in the industrial world, and it’s something that is reducing carbon dioxide emissions noticeably.
hydrogen forklift 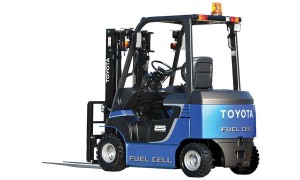 How is the System Greener?

Toyota is currently using all-electric forklifts throughout its plant, which seems green on the surface, but in reality most of that power is produced by burning fossil fuels. Switching to hydrogen-powered units is greener when you consider Toyota’s plan to use excess solar energy to create that hydrogen. That means that the hydrogen used by the forklifts will be mostly clean energy that didn’t require the release of any CO2 emissions into the air.

Toyota isn’t just planning to use hydrogen in its forklifts. The automaker is also looking for other areas where the fuel source could be applied for even more green improvements. There are serious opportunities in heating and cooling applications within the facility, where 60 percent of the energy is currently going.

Hydrogen is an exciting alternative fuel because it’s easy to produce from solar energy and it can be effectively stored until used. Sure it’s a bit less efficient than using electricity for the direct application right after it’s produced by the panel, but that’s not the point. A huge amount of solar energy can be harnessed at the right spots on earth, and that energy could be used all over the place if it was stored properly for when it’s actually needed, and also so that it can be transferred to locations away from where the power is being produced.

Toyota is leading the way for hydrogen fuel adoption with the Mirai, and perhaps in the future more people will rely on hydrogen as a fuel source because of the work that Toyota did.